We did a pilot study on the use of the Conquer PTSD Now Techniques by holding a 1-day course in which the 8 people learned and used the techniques to see how much they could reduce the severity of their PTSD symptoms. They took a PTSD assessment before the class started, again at the end of the day of training to see how much change happened immediately, and again a week later to see if the results lasted or got better or worse. The assessment form that they used to respond with the severity level of their symptoms is shown at the bottom of this web page.

We also knew that for some of the symptom severity levels people wouldn’t really know immediately after the class on the same day. For example, they wouldn’t be able to tell about reduced nightmares right after the class because they would not have gone to sleep yet!

The 8 participants were volunteers who learned and used the techniques during a 6 hour class that was held all on the same day. There were no individual 1-on-1 sessions. It was all group training.

This pilot study was done in Salt Lake City Utah with civilians who had gotten PTSD from various different traumatic experiences but not from being in the military. For example, one participant was a woman whose husband died in her arms. However, these people with PTSD had high symptom severity levels similar to military veterans who had been in combat.

The 17 main PTSD symptoms are organized into 3 groups or categories – Re-experiencing, Avoidance and Hyper-arousal. Here’s what we found out.

There was a dramatic reduction in PTSD symptom severity in all three categories of symptoms. The average reduction for all of the symptoms was 62.92% on the same day immediately after the 6 hours of training. Testing one week later the overall average severity levels were down about an additional 10%.

To contrast this with the averages of symptom severity levels obtained from treatment at the veterans’ administration, their program only produces about a 60% reduction in PTSD symptom severity but this takes 6 months to produce that reduction. They also don’t get an additional 10 points of reduction a week after reaching that 60% reduction level. And this is with leaving out the most severe cases. Take your pick, 6 hours or 6 months!

Here’s a graphic summary of the study results. 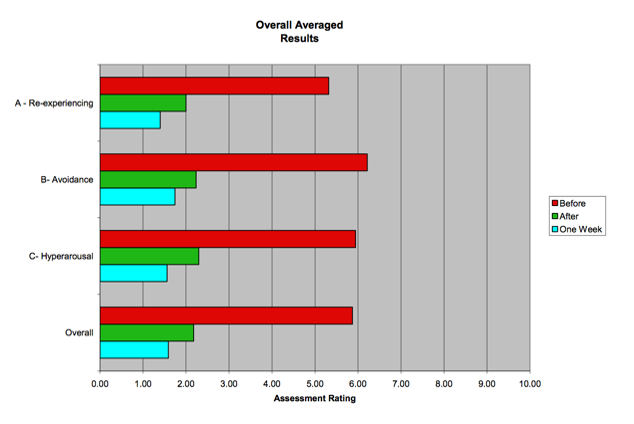 The PTSD Symptom Severity self-assessment form used in the study. 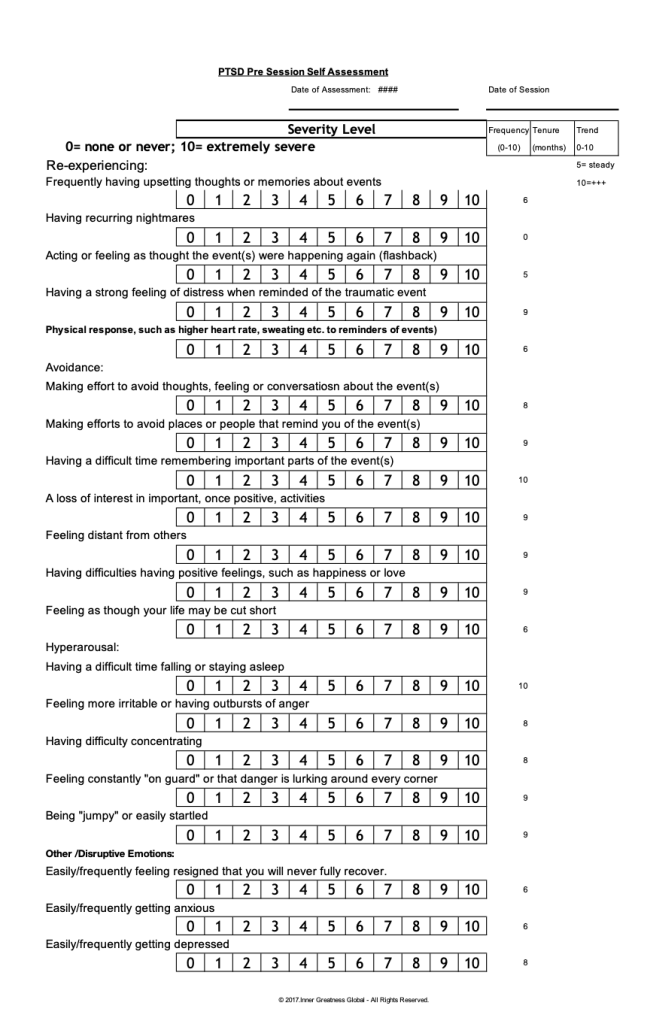