How to become one of the best coaches in the world

> How to become one of the best coaches in the world

You might be able to relate to something here…

You took a coach training course and perhaps even got a first level of certification like an ACC. You love helping people but you’re not making it as a coach. It just seems like something is missing. You really want to be a successful coach, to really help people improve their lives and also to make a good living doing that but… you are not meeting your goals and it’s frustrating and disappointing.

Or you may be considering changing careers and become a coach. You may have been considering taking some coach training but haven’t found what you are looking for. You have a sense that there’s something much better out there but you haven’t found it yet.

Or you might be a therapist or counselor and you also feel like although you are good at it there still feels like there’s something missing. It seems like you could be helping people even more. You’d love to see them get some major breakthrough and stop suffering. And although you have been going to additional workshops and trainings and learning some good stuff, it still feels like something basic is missing and you’d love to find it.

Or you may have a gift for helping people and you don’t think of it as a career, you just like to do it. People are drawn to you, they trust you, and often they tell you things that they say they haven’t told anyone else in their life. You help them and you are good at that. But sometimes you wish you were even better at it. You’ve been keeping your eyes open to find it but haven’t found it yet.

If one of these situations describes you or if you are experiencing something similar to this, then the universe has organized it for you to find this article. And if it’s really for you, you’ll get the sense of that as you read on.

First of all you should know that there is a reason that I know what I’m talking about here.

Thomas Leonard is considered by many to be the father of the modern coaching world.  He founded the ICF which is the International Coach Federation, the main organization that provides coach training guidelines and certifies coaches.  Thomas also created Coachville and CoachU, two of the largest coach training companies during the late 1990’s the early 2000’s.

Thomas hadn’t had his own personal coach for 10 years at the time he met me. He was looking for someone who was 10 steps ahead of him in their development. Within a week of meeting me he asked me to be his coach.

I had not had any coach training and although I was doing my own special form of helping people to get breakthroughs in their life I didn’t consider myself to be a coach. I called what I did Human Software Engineering. So I said to Thomas when he asked me to coach him – “I’m not a coach.” To which he replied – “Oh yes you are!” So I agreed to coach him for 1 hour per week for which he paid me at a nice rate.

After a few weeks of having me coach him he posted an email to a large list of coaches that were on his “R & D team.” It was mainly to tell them about me. He mentioned about this first session and how impressive that was, and from a guy with zero coach training. Then he said that I had the cleanest energy of anyone he had ever met, bare none. He then kindly promoted one of my upcoming seminars.

As you can imagine this rocketed me into instant fame within the coaching world at the time. I was now the coach of the coach of the coaches. My seminar was packed as a result of Thomas’ endorsement and a great many of his fans learned my way of working and abandoned their traditional coaching techniques and shifted completely to doing what they learned from me.

Thomas and I had some very interesting discussions about coaching and what coaches really need in order to be really effective. And we both agreed that the most important element of being a world class coach has to do with who you are being, not what coaching techniques you know. It’s about having that clean energy that Thomas had sensed in me. He wanted to be more like that too.

That was back in 2000. Unfortunately Thomas had a heart attack and died not long after that so I only got to coach him for a few months. He certainly made huge contributions to the field of coaching and had he still been here it would have evolved much more out of our collaboration. Before he died he asked me to be a keynote speaker at his annual Coachville conference and although he wasn’t alive when it happened later that year, I did give the keynote presentation and hundreds more coaches came to study with me.

So what’s the most important thing to do to become one of the best coaches in the world? It’s to become someone who people can sense that you are a living example of someone who has full access to and truly lives your inner greatness. It’s not about coaching techniques. It’s not about the ICF Core Competencies. It’s about who you are being!

Now there are lots of people who understand this concept but the most important thing is how do you clean up your energy, how do you actually become someone who can respond spontaneously to the needs of each moment from the fullness of your being. How do you actually develop the ability to consistently trust and act on your intuition, and to naturally access and express the power of your inner greatness to the fullest extent possible?

You can’t get there by taking coach training courses. And the vast majority of personal development books and seminars aren’t going to give it to you either. Is there a way to get there or does it just happen to a few people out of good luck? And if there is a way to get there, what’s the quickest and best way to do that?

Well, this might just be your lucky day. If you were destined to find it, you just did!

I’ve been continuously developing the field of Human Software Engineering (HSE) for about 25 years as of this writing which is in June of 2018. And this year I’ve had a new development that is accelerating people’s growth and progress to much more rapidly become someone with the attributes I’m describing here that are the qualities of a truly world-class coach.

It turns out that the main things that are in the way of your ability to live much more consistently from the fullest possible expression of your inner greatness are very difficult for people to recognize in themselves. And even if they do recognize them, they have a really hard time changing these old habitual limiting ways of being because they are so deeply ingrained and they don’t realize that this is occurring.

Here’s what’s happened since the beginning of 2018. I’m in China at the moment. I came here a few years ago at the recommendation of one of my top advisors. I’ve been setting up a network of Inner Greatness Centers in different cities in China and training hundreds of people in HSE. In March of this year I started a Presenter Training program with a group of about 35 or my top HSE coaches so that my workshops and trainings can be offered in cities all over China every month. I can’t do that all myself but I want it to be available as much as possible.

I already knew that for this to be successful, these coach/presenters need to be such good living expressions of their inner greatness so that when people see them presenting they might not be able to articulate what it is about the presenter that is impressing them. But they sense that there are some really excellent qualities about the presenter and the person listening feels – “Whatever it is this person has, I want some of that too!”

So I created what is called the Freedom Practice and I started my presenter training group on this program. Wow! I’ve been seeing these people evolving at such a rapid rate. They are exhibiting the qualities of accessing and expressing their inner greatness within a month or two. This is something I have rarely seen happen within a year of two from my normal training programs of the past. It has been accelerating people’s progress by a factor of 10 at least times faster than ever before.

This is because it provides a simple set of techniques that are easy for them to learn and incorporate into their lives on a daily basis. It includes making a simple Freedom Practice report and a review of the report with daily quick mentoring by me. They are already giving introductory presentations that are blowing people away!

So if you want to become one of the best coaches in the world, for that matter if you just want to be the best version of yourself in every aspect of your life that you can be, take the basic training to learn the techniques and then participate in a Freedom Practice Program group and rapidly remove your inner barriers to truly being and living your best self. It starts with an upcoming online training called Freedom from Illusions. Here are the details about it. Click on the image below. 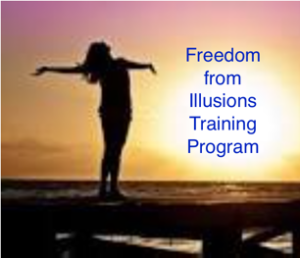